The middle Himalayan ranges are from 800 m to 4500 m elevation from the sea level. The middle and high mountains are the abode of a wide variety of rich flora and fauna and are the mother and home of hundreds of species of pine, cedar, oak, burans, etc. and thousands of herbal plants and shrubs, which are not seen in any other ranges of the world. Many perennial rivers, streams, waterfalls, and springs originate from these mountains are the source of drinking water as well as irrigation. The arable land, mostly rain-fed, which lies on both sides of river valleys on hillsides is contouring terraced with less width and more length. The Himalayas a rich abundance of water sources, though irrigate lakhs of acres of land in the plains, but cannot irrigate its own arable land as these water bodies fall and flow in the deep gorge valleys, whereas the land is quite above the river basin. Traditional farming practices are known as natural, and to some extent ecologically resilient, have been carried out for centuries for sustaining livelihoods. This farming practice is also known as the subsistence economy. It has been friendly with the indigenous biodiversity as the seeds and plants as well as farming methods were part of in-situ conservation.

Being a temperate zone and average annual rainfall of around 1500 mm, there are two seasons of cropping pattern and land use. Kharif is between April and September whereas Rabi between October and March. Crops like a barnyard, millet, foxtail millet, finger millet, paddy, maize, amaranths, oilseeds like sesame, and pulses like urad dal, cowpea, pigeon pea, and horse gram besides a number of vegetables are grown in Kharif, whereas in Rabi season wheat, pulses like lentil, gram pea and oilseeds like mustard are grown. Finger millet is basically a mixed crop with which urad, amaranths, and the cowpea are grown. Earlier the land in which millet is grown during Kharif season is being left fallow during Rabi as a part of crop rotation practice, perhaps to regain the soil nutrients. Millet especially Jhangora (barnyard) and Mandua (finger) are drought resistant and environmentally resilient crops.

The nature of subsistence agricultural practice is traditional which by default is organic with minimal use of chemical fertilizer and pesticide. A very small section owning irrigated land near their habitations also grows cash vegetables. The crisis engulfed hilly farming due to scattered pieces of agricultural land, mostly rain-fed marginal holdings and shortfall in precipitation puts extra moisture stress on the soil, and sometimes excessive rainfall caused landslides and flash floods, thus eroding and washing away topsoil. Vagaries of monsoon and extreme fluctuating weather conditions caused due climate change are a new phenomenon and challenge to the farming community to survive. Apart from this, added factors such as farming as high labor-intensive activity and poor response are reasons for low yields, which is insufficient to meet the family’s food requirements. All these factors rendered farming an un-remunerative activity compared to the present labor wages, which have led to abandoning this practice. The traditional crops, grown earlier, have been gradually abandoned due to a variety of reasons, including changes in food habits as well as low yields caused due to periodic loss of soil nutrients and microorganisms. The rich nutrient millet like jhangora (barnyard) and mandua (finger), both drought-resistant and ecologically resilient crops, which were the staple diet of people earlier, have been overtaken by rice and wheat due to cheap and easy access to the PDS ration shops. 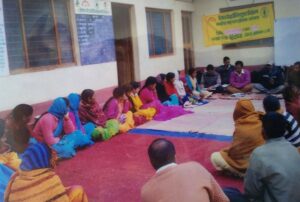 Subsistence agriculture, which is very traditional, but now practiced poorly due to lack of climate adapt practices as new generations have forgotten the indigenous knowledge on sustainable practices like crop rotation, mixed crop farming, and diversification. To some extent, even millet is grown on dry land replaced with paddy (high water consumed crop) and wheat, which need greater moisture. Input supply, including animal manure and improved seeds, is also poor due to a decrease in the number of cattle and disenchantment towards growing and eating millet like jhangora and mandua. Nature of land holdings is not only marginal, but its size is less width and more length on hillside contours with flat and slope. The soil is of various types from stiff clay to the brown forest, though often shallow, gravely but rich in organic contents. The topsoil of the area is quite fertile, but, every year its erosion and washing away render it infertile due to loss of nutrients and microorganisms. Water erosion affects the soil nutrients immensely and reversely depleting nutrients also magnify the erosion because of lower production of above and below-ground biomass, which protects the soil against erosion. Though the millet and pulses grown here have high nutrient contents (finger millet 18% dietary fiber) as well as flavor, a lack of value addition and poor supply chain, have hampered the marketing potentials. The solution lies in soil and water management; mitigating runoff and soil erosion the ex-situ and in-situ conservation methods,  restoration and replenishment of soil nutrients and microorganism through adequate supply and re-infiltration of manure and biomass compost, promotion of low-cost agricultural inputs like vermicomposting,   seed treatment and conservation, IPM, improved cultivation practices and post-harvest management including value addition, the better supply chain for marketing. 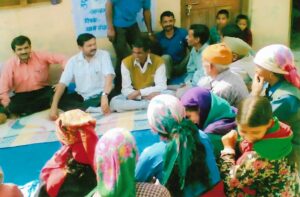 On-farm activities as livelihood opportunities, though limited, are available for the people, in a fresh and healthy environment, especially for weaker sections in the project area. But whatever is available that needed carefully harnessed, upgraded, and improved with science and technology interventions. The subsistence agriculture as well as subsidiary artisan activities needed to be upgraded. So far as agriculture is concerned, the positive factors are that the millet and pulses are mixed crops, drought resistant and environmentally resilient and a mere diversification and rotation would make it a strong preserver of the biodiversity contributing to decrease greenhouse gas emissions and increase carbon sinks Organic farming, which works in close harmony with nature will be promoted. It will involve techniques to improve crop yields without causing harm to the natural environment. In organic farming, feeding the soil is considered important, rather than feeding the plants. Resource optimization shall be the key agenda, whereby the knowledge on in-situ and ex-situ water management/conservation practices, degrading soil health would be delivered. Farmers’ interest groups formed and trained will ensure the long-term sustainability of the interventions.

Increasing risk to agriculture demand promotion of sustainable agriculture practices. Sustainable agriculture is a farming practice that gives emphasis on conserving ecology. We need to focus on growing food with efficient use of natural resources available rather than only maximizing the production and profit to ensure environmental health, economic profitability, social and economic equity. Agricultural activities to be counted as sustainable and should satisfy three conditions; it should not cause harm to the environment; they should be affordable and meet society’s needs. In other terms, it should be economically viable, socially responsible, and ecologically sound.