Under this subject HETONA has implemented 04 projects of which 03 were based on our theme and in one we participated as a support organization. The wasteland development and watershed management, To identify and popularise appropriate technologies on water management, health and sanitation, public participatory awareness programme on Ganga pollution and Swachh Bharat Mission were the main projects.

(a) Wasteland Development & Watershed Management: It is a well known fact that with the increasing use of chemical fertilizers and pesticides, quality of land everywhere is degrading. In certain regions water tables are drastically going down, water logging is becoming alarming, area under alkalinity and salinity is increasing in desertification and stretch in sandy area. This has led to ecological imbalance and agricultural vulnerability. In order to arrest this problem HETONA has taken this task in a form of pilot project with financial assistance from wasteland development boar GOI  for an area of 50 hectares in 04 villages; Chhaijula, Kamda, Kavata and Tandol of Chinyali block.  A central nursery was raised and plants of indigenous species were planted. Villagers were made aware on ecological degradation. Plantation undertaken on waste barren land asthe following pictures show: 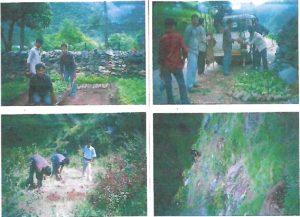 (b) To Identify and popularise appropriate technologies on water management, health and sanitation: This project financed by Ministry of Science and Technology, GOI mainly focussed on technological interventions on better use and management of water for all purpose, general and reproductive health and environmental sanitation. We have implemented this project in 06 villages namely; Morgi, Wareth, Kuthaldi, Wamanti, Shrikot and Chilot of Chinyali block.  Our interventions made the community aware particularly on water conservation, household sanitation and reproductive health.  Following photographs show the activities: 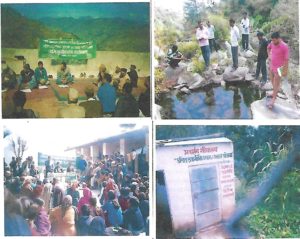 (c) Public Participatory awareness programme on Ganga Pollution:  A project sponsored by NRCD, Ministry of Forestry and Environment GOI, we have entered into agreement with Uttaranchal Payjal Sansthan Avom Vikas Nigam and Ganga Pradushan Niyantran Ikai Uttarkashi  to spread awareness on Ganga pollution in and around Uttarkashi town. The awareness programme was in the various forms like street theatre, symposia, seminar, exhibitions, rallies, meetings and art and painting competitions in the schools and colleges. The pollution like direct throwing of garbage, direct/indirect disposing off of human excretes, animal carcases, half-burnt carcases of human, plastic and other synthetic materials, was highlighted as the main reason of ganga pollution in and around Uttarkashi town by these media. The programme was very successful as is shown in the following pics: 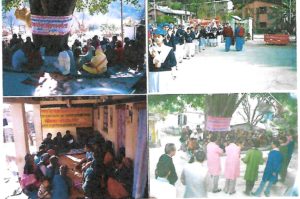 Mission: Open defecation and sewage contamination of drinking and bathing water has been an endemic sanitary problem in India. In 2017, India was the country with the highest number of people practicing open defecation, around 525 million people. This centuries old practice in rural India, has badly affected the health, hygiene and environmental sanitation of the populace. In other words, it has also a negative impact on rural economy as the capacity of people to work and contribute more on their income generations, decreased due to waterborne and fecal oral route transmission diseases, particularly of intestinal diseases. It has more negative effect on children, women and old age people. Realizing this precarious situation the government had launched a total sanitation campaign from almost a two decade ago in 1999, but it was from 2014, when it became a people’s movement with renaming it as Swachh Bharat mission (SBM). Prime Minister Narendra Modi has given a clarion call to make the rural India defecation free by 2019 on the occasion of birth anniversary of the father of nation, Mahatma Gandhi.

The objectives of Swachh Bharat include eliminating open defecation through the construction of household-owned and community-owned toilets and establishing an accountable mechanism of monitoring toilet use. Run by the Government of India , the mission aims to achieve an Open-Defecation Free (ODF) India.

Other objectives of the SBM are:

1. To bring qualitative change in lives of rural people.

3. To raise the demand for sanitary facilities through awareness campaign and health education.

5. To promote cheap and appropriate sanitary facilities, and

6. To continue efforts on reducing diseases related to water and sanitation.

Like many other state governments, the Uttarakhand governent has taken this campaign as a mass movement against the filth and open defecation and we as a premier NGO in District Uttarkashi played a vital role in 3 blocks namely Chiniyalisaur, Naugaon and Bhatwari  as a sanitation promoter intermediary support organization with district project management unit (DPMU). In total we facilitated the community in interior villages to construct sanitary household latrines and of the 6005 total targets in 115 GPs, 5909 latrines were constructed, which is 98.40% success against the allotted targets.  The following pics show the HETONA’s awareness campaign to achieve the above target: 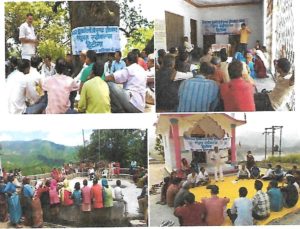