While it is ridiculous to say that if you delink ‘Ba’ from Badalda, it is a brand of ghee famous in the Indian market in the sixties and seventies, made from natural plants before the advent of refined oil, one such oil which is still very much liked and used by Indian housewives in their kitchen. But this backward village of interior rural areas, whose meaningless name is difficult to correctly pronounce by outsiders, is awakened  with the advent of a project on water and sanitation under the small grant facility of UNDP implemented through Ministry of Forestry and Environment, Government of India. Consulting Engineering Services (India) Limited, New Delhi, HETONA-NGO and Gram Paryavaran avom Vikas Samiti Badalda were the key partners in the planning, implementation, operation and maintenance of the project. Badalda like a normal Indian village considered itself economically self-reliant due to the advantage of its location, topography, land, water and jungles as the village is situated at a height of around 1200 meters from the sea level and almost 70 km away from district and 40 km from block headquarters respectively. A perennial rivulet just flows below the village at a distance ranging from one to four furlong towards southeast and  irrigated terraced agricultural fields, which lie between the village and the river basin are perhaps a proud of the villagers for self-sufficiency in food especially rice and wheat. Though, additionally they have also dry land in upstream areas on hillsides across the river valley for surplus grains, but their staple diets remain daal-bhaat. 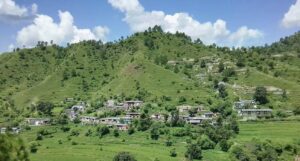 But, for centuries the villagers were using contaminated, polluted water of the rivulet through an open irrigation channel. While the availability and accessibility of water were enough and easy, but quality was bad as it was an open channel untreated water and even the villagers use to defecate in upstream/downstream areas. Apart from this, in the upstream areas, there was a habitation known as Mathali village and during rainy season and flood time, water becomes muddy and more polluted with human and animal fecal   as the villagers used to defecate in open mainly in and around water sources. During monsoon, there were incidents of cases of diarrhea and other intestinal disease and village women whose main duty were to fetch the drinking water, were forced to travel long distance in search of comparatively clean water, the springs of which are erupted during the monsoon at various places. In the beginning of 2002, some enlightened people of the village requested to start this program in their own villages in view of the work of providing the supply and environmental cleanliness in the self-contained rural areas by the HETONA-NGO. By this time, the work of HETONA had gained fame in the field of water and sanitation.  On the demand of the villagers, and realizing that the villagers really want this demand driven community participatory project, the organization consulted its partner agency “Consulting Engineer Services Private Limited, New Delhi” in load development activities in small power project in Janaki Chatti near Yamunotry  and requested to explore the possibility of drinking water and sanitation for the villagers. The agency assured the approval of the project under the UNDP Small Grant facility.

What were then, the NGO workers and the villagers were on ninth heaven, no place for their happiness and the work of village feasibility survey was started. From source selection, survey of the water line, personal connections, stand posts, and construction of toilets (till then there was not a single toilet in the village), on all these issues, social mapping was done by the villagers with the help of organization facilitators. “Bagi-Badalda Payajal” scheme approved for village Badalda, courtesy of CES Ltd. On the basis of community participation after a bit of hard work, the pilot scheme and 80% of the toilets were constructed for about 60 families in the village and its hamlets at that time. Toilets are now 100% after the Swachh Bharat Abhiyan. This project had the following effect:
1. The desire for pure drinking water of the villagers was fulfilled.
2.    Women no longer had to wander around for potable drinking water and lost their extra workload which they used for their health promotion and clean living.  3.    Construction of toilets by most families in the village ended the mess around common paths and drinking water sources, due to which the village became a topic of discussion in the neighboring villages.
4.     Village related to waterborne and fecal-to-mouth diseases and other diseases were reduced significantly.
5.     The Drinking water Scheme was well maintained and operated by the villagers and the scheme has completed its design period of 15 years in 2017 and the Drinking Water Scheme is still running smoothly.
6.     Initially, among the villagers of neighboring villages, this changing picture of Badalda was definitely blurred, but later they expressed their desire to run a similar project in their village.
7.    The girls of Badalda village refused to marry in a village where there were no toilets, due to which they initially got into the eyes of the people, but later people had to face the shame of not having toilets and were motivated to build toilets.

Next Story –  How drinking water and sanitation has become a change-maker for Mukhba residents.