Livelihood project played a catalyst in the lives of rural poor

Mainol as usual an idle and sleepy hilly village located at an elevation of 1158 meters above sea level in a Dunda block of Uttarkashi, woke up in the early autumn of 2008 with the advent of a project focused on livelihood improvements of the poor. With regular ‘to and fro visits’ of the HETONA facilitators the village awakens and became the center of various hectic activities like meetings, focused group discussions, wealth ranking exercises, SHG formation, especially of women and their capacity building trainings, especially with savings and credit and more precisely on identification of problems, their solutions and process of decision makings.

The village is situated at a distance of 47 kilometer from Tehsil/block headquarter Dunda and almost 65 kilometer from district headquarter Uttarkashi. According to 2019 statistics, a head count survey, it has about 101 houses and 494 population living, in which about 50% were Scheduled Caste households. The village was stigmatized for Daru ka Adda ‘(the center of homemade liquor), which was mainly taken out by poor Scheduled Caste women. As most of them were landless and marginal farmers, they depended on the sale of liquor for petty cash, but with adequate availability of alcohol at home, male members also became addicted, which not only disturbed the peace in the house, including violence on women rather ruined the domestic economy further. The women of these poor families were fed up with this situation, where they had no peace, no dignity, no harmony and even no economic consolation, wanted to get rid of it and come out of this situation. 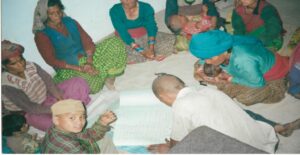 And here was a way, a ray of hope, an alternative solution in the form of a livelihood improvement project known as “Aajeevika” which was funded by IFAD and implemented by the Government of Uttarakhand. The Uttarakhand Rural Development Committee (UGVS) and its units PMU, DMU and UPASAK as a venture capital company and HETONA as a field NGO were partners to plan and execute the project. The success story along with its success is as follows:

With the concerted efforts of meetings, organization, trainings the community, especially scheduled castes got mobilized and galvanized to take action. With FNGO’s facilitators help they rightly identified their problems and tried to solve with an open opportunity to find a solution. Mrs. Sarojini is a member of Nagaraja Swayam Sahayata Samuh, who influenced her husband Chatarlal and opted for a maternity unit of breeding cryler chicks and nursed 500 DOCs and sold them for Rs. 6000.00 and earned a profit of 4465.00.
His daughter is also getting married during the same period and this earning has come at a right time for this poor family, who has no other source of income other than lending from local moneylender at extra rates This was a great relief for this family and later they decided to continue this income generating activity which is still going on and there has been a lot of improvement in the standard of living of the family which has an impact on other people of their class and also the neighboring villagers. 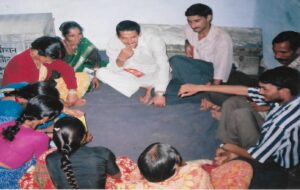 Similar story is of Prem Lal of another scheduled caste family of the village. He bought 15 chicks at the rate of Rs 20 each and after a month he sold 10 chickens at the rate of Rs 200 and earned Rs 2000. Premlal was a landless who worked as an agricultural worker in the land of other landlords.  He wanted to buy a pair of bullocks to raise his wages besides plowing the land. At the same time he received Rs 1000 of his wages and in addition with it he had Rs 3000 in hand and bought a pair of oxen. Now he plows his land for which he had to borrow the bullocks first, and also plows the land to recover the labor cost of himself and his bullocks. The impact of this project was as follows:

Previous Story-NRDWP rejuvenated the appetite of development of Dwari inhabitants