How drinking water and sanitation has become a change-maker for Mukhba residents.

Mukhba’s quiet abode, a winter seat of Mother Ganga is located at a height of 2620 meters from sea level, just few hundred meters above the bank of Bhagirathi near Harshil in Uttarkashi district of Uttarakhand and is one of the most captivating places in India. The village is set against a magnificent calming backdrop of tall, lush green trees and snow-capped mountains, filled with wooden dwellings, and attract tourists from all over the subcontinent. This pleasant hill destination is the best solution for you if you are seeking a vacation from the fast-paced city life. Cut your hair down and spend your mind, body and soul again in the midst of nature.

But the village, which accommodates 124 households and 687 populations as per 2011 census, has been in discussion since 2017 for the other reasons and that reason is drinking water and sanitation under national rural drinking water program of ministry of water resources, GOI. At the state, district and Panchayat level PMU, DPMU, NGO-HETONA and Mukhba GP-UWSSC were the partners to plan, implement, operate and maintain the program. The planning started in 2015 and water scheme and sanitation activities completed in 2017 and handed over to the Gram Panchayat for operation and maintenance in the same year.

Before the completion of this project, the womenfolk whose main responsibility is to fetch water not only for drinking, but also of other use, has to travel one to five kilometers as there are 3 main hamlets of the GP mainly Mukhba main, Saada and Markandey, to nearby gadhera (rivulet). Besides overburdening of agricultural/horticultural activities and household chorus, daily fetching of water has further added their drudgery. Despite the village a winter seat of Mother Ganga and continuous influx of pilgrims and tourists, the sanitation coverage of the village was also very poor. Of the 150 households in 2015, only 60 have proper household sanitary latrines. Open defecation was common in a very sacred pilgrimage village of Maa Ganga.

HETONA as a support organization, started to facilitate the planning with PRA tool. It formed User Water & a Sanitation Sub Committee (UWSSC) of Gram Panchayat, with representation from all three hamlets and 30% and 20% of women and scheduled castes respectively. Besides UWSSC, HETONA focused on strengthening the women and its organization the Mahila Mangal Dal. A series of awareness and capacity building programs led to galvanization of community to prepare them to plan and execute the project. Ms. Anita Rana, the gram Pradhan and also being ex officio chairperson of UWSSC played a pivotal role in this project. She mobilized and led the village womenfolk in a manner to make the access to drinking water and environmental sanitation a people’s movement. As a result of this, 90 remaining toilets were constructed within 9 months. The mass village sanitation campaign (cleaning) was conducted twice in a month. All residents started using toilets regularly and keeping them clean. This resulted in open defecation free village paths, water sources and other common places, which earlier were used for defecation. Water scheme with a cost of Rs. 2974450.00 was completed within 12 months, which was constructed by UWSSC and its chairperson a woman Pradhan. With household connection of taped water, it was a big relief for women, who not only saved their time earlier consumed for fetching water, but also reduced drudgery. The project was impact making because: 1. It raised the level of awareness amongst villagers, particularly of women on personal hygiene, domestic and environmental sanitation. 2. With 100% construction of household latrine, their use and regular cleaning, quarterly cleaning of village path and water sources, the Gram Panchayat has become open defecation free, declared by the district administration. 3. The time savings now used by women is taking a rest and to reduce the drudgery, as well as used this time for woolen crafting to produce a rug, sweater, shawl etc. This led to increase in their income thus further empowering them. 4. The women also said that they have witnessed a decrease in cases of water born and fecal oral route transmission diseases particular of intestinal. 5. The villagers and their womenfolk became vocal on their social, economic and developmental issues. The gram Panchayat Mukhba, which was earlier not included in the list of “Ganga grams” by state and central government, the villagers led by women Pradhan Ms. Anita Rana met Ms. Uma Bharti then union minister of drinking water and sanitation during her Gangotri visit and got included their village in Ganga gram declared on March 11, 2018. 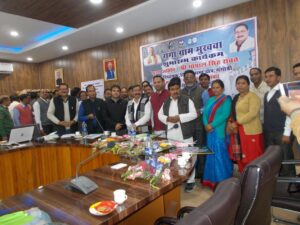 6. Recently it is also reported that the number of pilgrims and tourists have shot up in Mukhba due to clean environmental sanitation conditions and the state government have also decided to open Mukhba for Ganga Darshan in winter season.

Next Story– Netusha a torch bearer for the dark valley of Gadugad.