Impact story: Netusha a torch bearer for the dark valley of Gadugad.

The Gadugad watersheds which originate from the forests of Jarmola  range, accommodates a dozen of villages and Netusha a hamlet of Wingsari GP is one of them. For a traveler from Uttarkashi to Mori or even ahead, neither the gram Panchayat Wingsari nor its hamlet is seen from any point, even from a small time bus stop Kharsadi, a center of that area, located on the Purola – Mori – Tueni Road. Therefore, if one aims to visit this gram panchayat, one will get a little confused and may need the help of local people to guide the right path to successfully reach there. Once you reach Wingsari, a village located on a hill, an abode of peace, surrounded by dense forests of pine and oak, looks as we have stepped into heaven. But the route from Wingsari to Netusha passes through a dense forest over a dark valley, a habitat of many flora and fauna, including some dangerous wild animals like leopard and bear, making you curiouser and curiouser and a little bit crazier of romance, suspense and thrill until you reach on a ridge, from where Netusha appeared. Netusha a hamlet situated in deep forest at a height of 1600 meters from sea level is15 km from block headquarter Mori and 140 km away from district headquarter Uttarkashi. It has the mix population of 160 with 22 families on a head count survey of 2007 of Hindus and Muslims. While the village Wingsari is inhabited by local Gadugadis, Netusha is inhabited by migrant Hindu people from the Bangan areas and Muslims are mainly nomadic Gurjars from the Tons Valley. 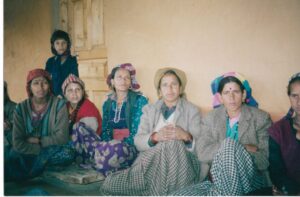 As the water scheme prepared by Uttarakhand Jal Sansthan for a long time was damaged and unused, women had to travel a distance of about one and half kilometer to fetch drinking water from a natural source known as Kunchhali located in a dense forest. While fetching water they were always afraid of an attack of wild animals, especially leopard and bear, besides, this extra time consuming activity had put an additional workload on them.The unavailability of adequate water also hinders their quest for more personal hygiene, and it was useless to talk about the construction of toilets and bathrooms in the absence of water. While the hamlet was small with 22 households, but the environmental sanitation was very poor as people used to defecate on village path or nearby areas due to fear of wild animals. Till then, they hardly ever had heard about the toilets. Our initial discussions with women were about the nature of their work, their personal hygiene and sanitation.  After having meetings with them, we realized that they want to lead a hygienic lifestyle but were unable to do it due to unavailability of water. This hamlet was fortunate amongst few to be selected for a SWAp program of the government of Uttarakhand, a project funded by the World Bank, an extended form of Swajal with sector wise approach in uniformity for all implementing agencies on water sector at district level.

All necessary activities were conducted with the participatory approach to mobilize and galvanize the community for planning, implementation and operation and maintenance. A detailed project report of Rs. 224095 was prepared for water scheme and a village action plan for personal, domestic hygiene and environmental sanitation were also planned.

Community have shown its keen interests in implementing the schemes as it thought rarely a scheme has arrived in their backward village and if they miss it, it would have a reverse impact on their progress. They have also contributed in cash and labor as the water scheme and sanitation were in demand driven with community contribution an integrated component an attribution of the community participation experiment. They have successfully constructed a water scheme and availed the accessibility of potable safe drinking water and of the 22 households 15 have constructed toilets, which now all households have constructed and hamlet is open defecation free. The followings are the impact of this project: 1.  Women ended their drudgery of fetching drinking water and saved time was used for other activities like regular personal, domestic hygiene and environmental sanitation.  2.  Nomad Gujjar Muslim families took this message to their clan in Tons Valley and the effect was that this nomadic community also became sensitive to health and hygiene. 3.  There was an impact on nearby villages and the name of SAWp became popular and people demanded this type project in their own villages.

Previous Story– How drinking water and sanitation has become a change-maker for Mukhba residents.