Gailari a tiny hamlet of a comparatively big Gram Panchayat Tuliyara, in the sense of a hilly village, was reeling under drinking water scarcity since the day one, when around 100 years ago, some Mishra Brahman families had trekked down here from a high landed Rountal village to settle down permanently. Despite, river Bhagirathi flowing down at a distance of around two and a half furlong, Still the availability of sufficient water to quench thirst was their dream. The womenfolk, whose daily household chorus has this additional responsibility of fetching water for drinking and other requirements, got tired of this unending workload of daily ‘to and fro’ rounds, to cover a distance of two kilometer from a natural water source that fall under the outskirts of Sunargaon rivulet. 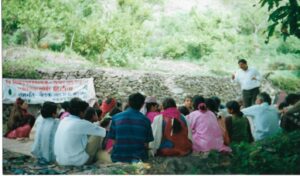 Village women tired a lot wanted to get rid of this additional drudgery, but could not find any way. Their male counterparts did try a lot and made several oral and written appeals to the concerning authorities but have no respite as before then, the population of the hamlet was much lower to meet the government’s parameters for constructing a gravity piped water scheme. During September 1999, somehow they heard about Swajal pariyojna as it was almost the beginning of its entry in Uttarkashi district and few villages of batch-I have merely completed the planning phase and entered into an implementation phase. The Gailari residents might have heard about it as the hamlet is at a distance of just 2 kilometers from the block headquarter Chinyalisaur and approached the Swajal office (DPMU) at Uttarkashi and got selected for the project after a prefeasibility survey.

We HETONA as a support organization initially thought that, it would be very easy to mobilize the community of a small hamlet and would resolve any disputes if arisen. Gailari in that sense was eventually a tiny hamlet of around 14 households with 148 populations on the bases of a head count survey in the year 2000.  Our perception belied, which was based on a bitter experience of a big village of Bangaon of batch-1, where we really toiled to galvanize the community and resolved the disputes. Community participation in a real sense has always been a tough task.

In Gailari the problem was not with its residents rather they were highly motivated for implementation of this project. They were overzealous to take part in each activity, including personal, domestic hygiene and environmental sanitation. Each household constructed sanitary latrines, soak pits and compost pits for making the environmental sanitation a success with neat and clean village paths an open defecation free. Moreover, they have also made their courtyards neat and clean and with their own money have erected the stone masonry wall to give it a fine look, all around the courtyards, when they constructed sanitary latrines and bathrooms. Remember, that the promotional amount for constructing a toilet was then Rs. 2250, whereas the cost of a latrine construction including ground and super structure Rs. 8000. Besides, there were no incentives to construct the bathroom.

The village came into limelight due to this overall physical change witnessed by many people as it is located just below the Dharasu-Jogath motor road. Everything was going well and the village was about to enter a tripartite agreement for the implementation phase, a dispute triggered of about water source.

Though source selected was undisputed and an NOC was undertaken in advance during pre-feasibility survey from 2 families residing at a distance of over 500 meters from the source, but the families instigated by the miscreants on behest of some local contractors whose eagle eyes were on to usurp the contract.  With the spread of the news of Gailari as developing a model village and the dispute regarding water source triggering off, attracted the attention of the district authorities.

On HETONA’s plea district magistrate decided to send a fact finding team of officials to Gailari, but the contractors lobby, hell bent to oppose the scheme, made a lot of hue and cry and blocked the way near the block headquarter and succeeded obstructing team’s movement. The contractors led by then Gram Panchayat Pradhan, wanted that no senior district officers visit the Gailari and see the development taking place there. Finally, district Magistrate understood the machinations behind this and ordered Chief Development Officer, Sub Divisional Magistrate and nodal officers of all line departments to visit Gailari in full view of the local media. Finally, they visited and praised the efforts of HETONA and commitment of villagers for development and water. SDM ordered Patwari, a revenue officer to conduct an inquiry on source dispute, which he did and submitted the report that in fact the source is not on a disputed site; the opposition has no evidence to support their claim. The dispute was created to usurp the contract and it was a conflict of interests of contractors to community participatory Swajal project, which has no place for contractual practice and other villagers jumped into it out. 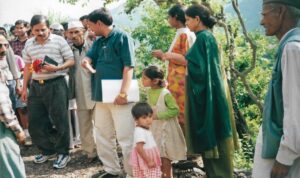 Later on World Bank mission also visited Gailari and praised the efforts of HETONA as well as villages, especially women who have shown their commitment to make the project successful. Finally a water scheme of Rs. 306528.00 was constructed by the village community and womenfolk of Gailari got rid of their problem of drinking water. The impact of the Project was as follows:

Previous Story– Netusha a torchbearer for the dark valley of Gadugad.