Katkhan residents were suffering due to lack of water right from the days they left their native village Badsi and settled here. Although arable land was vast, drinking water was scarce and even the villagers had to go to a natural source which was about 500 meters below the habitation. In fact, it was a difficult task for the hill women to fetch water and carry water from bottom to top of a straight hill from the water source.    It was a newly created gram Panchayat, made out from the Badsi, but gram Panchayat affairs were still dominated by powerful individuals, with a duality inhabited by them; Badsi as well as Katkhan. Although the Gram Panchayat Katkhan has four habitations; Katkhan, Kyargadi, Chopdi Dhar and Bagna, but the largest abode of all was Katkhan. Surprisingly, the people of these habitations have conflicting interests on water and they generally have face to face quarrel with it. Of them Kyargaddi was located near the water source, which was quite away from Katkhan, Bagna and Chopadi Dhar, has a dominant say over water and its use. 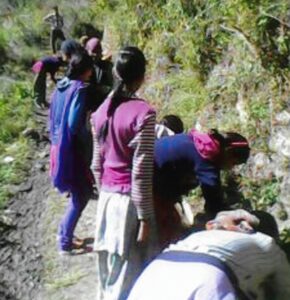 Katakan GP is located at an altitude of 1920 meters above sea level in the Gamri belt of Chinyalisaur block in Uttarkashi district of Uttarakhand. The Gram Panchayat is still not connected by road, although they have access to a road near the village of Khand but after trekking down from 2 to 5 km with an average from all their settlements. Shri Gopalmani ji Maharaj, a famous saint, a fine narrator of ancient puranic tales and a down to earth devout of cows, has a cowshed located in Chopdi Dhar. Block headquarter Chinyalisaur is around 25 km from here and district headquarter almost 60km. All four hamlets are surrounded by trees of pine, oak, burans and is also the abode of beautiful birds and other wild animals. 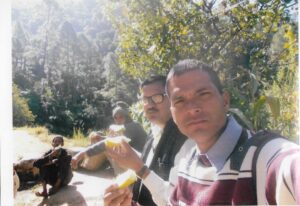 During the autumn of 2014, we as a support organization of NRDWP besides two other partners; DPMU (Swajal) and Gram Panchayat Ktkhan, our facilitators entered into the village and have discussions with various groups about drinking water, sanitation, hygiene and health. Although, the village is located in a highland area in the center of the forest, but its paths were full of smells with Guraan (human feces) and it was not easy to move from one side to another. Though other hamlets were far flung from the main village with scattered houses, but the sanitation situation was likewise. During the social mapping, our facilitators also found that there were cases of diarrhea, jaundice and typhoid mainly due to  use of stale water as it was not possible to fetch fresh water regularly due to long distance and a climbing return path from a water source.  In many villages of hill area, where distance for fetching water is greater, use of stale water is also more and the result is waterborne diseases. But the situation was different in Kyargaddi, Chopadi Dhar and Bagna where natural water sources were near though untreated. Initially, we thought that everything will be as smooth as the villagers are suffering from the inaccessibility of potable drinking water, yet we were very small to understand their dynamics and conflicting interests. The dispute was mainly from Kyargaddi residents, who were quite adamant not to accede the water demand of Katkhan residents. The perennial water source Bandan Khal located at 1960 meters elevation almost 40 meters above from the Katkhan village was within the territory of Kyargaddi, which was also the source for irrigation of their land. Kyargaddi residents wanted that Katkhan pipeline can be tapped from below kyargaddi but its elevation was lower than Katkhan and gravity scheme was not possible. Besides, tapping the water source which is a gadhera (rivulet) from below a habitation has the high potential of pollution especially of fecal elements.  And this all happened after the formation and training of User Water and Sanitation Subcommittee (UWSSC) in which members of all hamlets including Kyargaddi were representing. This episode exploded when, I as a team leader, our community facilitator and junior engineer planed the w/s survey and indeed visited Kyargaddi. As we were about to move to water source an elderly person so furious stopped us and challenged that no one can take water from here. We all were shocked, including UWSSC chairperson and treasurer and even a member from Kyargaddi who was an ex BDC member. For the time being there was a fierce exchange of words amongst them and when the matter subsided, then we intervened and requested them to first have an overview and terrestrial inspection. I said to them that after inspection and water measurement, we will sit, discuss and decide the matter. As per our head count survey in 2014, there were a total of 59 households with 392 populations. The subgroups were mainly of Brahmin known as katkhani Nautiyal and very few households of schedule castes mainly village drummer and blacksmith. The story remains a myth like an egg and the hen that who arrived first. The story is applicable to residents of Badasi and Katkhan that who who migrated first from where. But we came understand that only few families reside permanently in Katkhan areas, and rest used to dwell from Katkhan to Badasi and vice versa. A number of training programs for the capacity building of the community were conducted; women also took the best part, but due to disputes over the water source and the long process taken for its resolution, involved the male members greatly in most of the activities. Focus on health, hygiene and sanitation was made, though group discussions, focused group discussions, through use of SARAR tools, which led them to start a village cleanup campaign. All 59 households vowed to construct toilets and the promotional subsidy for each was Rs.12000. Simultaneously a cleanup campaign (Swachchh Bharat Mission) was also organized and by 2017 all households constructed toilets and the Gram Panchayat became open defecation free. A water scheme covering Katkhan, Chopdi Dhar, Bagna and Kyargaddi amount to cumulative cost of Rs. 24.12 lakh was constructed by 2016 and people especially Katkhan and Chopadi Dhar accessed potable safe drinking water.  Following were the impacts of this programme: