Kanda-Karnali showed new light to many villages of Banal region

Located deep into the midst of pine forest at a height of 2000 meters from sea level in Banal Patti of Naugaon block, district Uttarkashi, Uttarakhand, India, gram panchayat Kanda and its hamlet Karnali was trying to overcome its backwardness when HETONA an NGO based in Uttarkashi reached there with a new message to bring change in their lifestyle through potable safe drinking water, hygiene and sanitation. The village is about 35km from Block Headquarter Naugaon and almost 125 km from District Headquarter Uttarkashi, deep into north from Gadoli, a small-time market and bus stop of Naugaon-Rajgarhi Road. A famous Bayali jungle of deodar stretched over an area of 50 square km ranges from the hilltop of Rajgarhi to Bayali. Now Kanda is connected with a link Road from Gadoli and one can also travel on foot from Kanda to Purola by crossing the Bayali ridge, before a vehicle reach Purola by road.

Before the arrival of SWAp (Sector wise approach program for drinking water and sanitation), Kanda and its hamlet Karnali were reeling under the scarcity of potable drinking water, unhygienic personal and domestic conditions and   feces-full village paths and water sources. The distance between main village Kanda and its hamlet Karnali (1850 m) is about one and half km. There were a total of 84 households with 553 populations on the bases of a head count survey in 2009.

The key partners of the project for planning, implementation and operation and maintenance were DPMU-HETONA-GP. District Project Management Unit of Swajal Pariyojna was the district implementing agency, The Himalayan Ecology & Treatment of Natural Agriculture Samiti was the support organization to facilitate the community for planning, implementation and operation and maintenance and Gram Panchayat Kanda and its sub-committee on water the User water and sanitation sub-committees Kanda and Karnali were the implementing agencies as village level.

SWAp was a demand driven community participatory cost sharing project with 90:10 percent ratio of Government and gram Panchayat respectively. The contribution was both in cash and labor at a ratio of 60:40 percent. But in SWAP the government of Uttarakhand prescribed a norm for Rs. 600 for general category, Rs. 300 for SC/ST for private connection. For public stand post the cash contribution per family for general category was Rs. 300 and SC/ST Rs. 150. 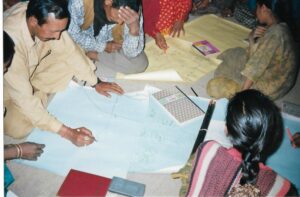 Since the village and its hamlet was facing a drinking water crisis due damage to old lines, villagers preferred to deposit their contribution in cash and wanted the water scheme constructed as early as possible. A detailed project report of Rs.21.77 lakh for Kanda and Karnali was prepared and got approved from DWSC. Within a year water schemes were successfully constructed villagers especially women have accessed the potable safe drinking water at their doorstep which overthrown their long awaited workload.

The main work for motivation remained to make the villagers especially women sensitize on health, hygiene and sanitation. Before, though, they have heard about the latrines, but not aware about its use and functioning. They, especially women were prejudice about a toilet in the premises of their house, because many of them were stout devout of their local goddess and gods. To convince to construct a toilet within the premises was a difficult task, but our facilitators were also very determined who easily do not accede their defeat. It was also the test of community participatory approach for our volunteers.

So they started anew with SARAR tools. A number of play cards on hygiene and sanitation like identification of problems and their solutions, good and bad habits, fecal oral rout transmission disease, diseases that transmit through hand to mouth were displayed before them in group discussions and they were facilitated to correct use of the tools. This method proved inspirational for them to realize their present conditions and its solutions. They realized that due to absence of latrines and bathroom sometimes their privacy is exposed which becomes embracing for them. 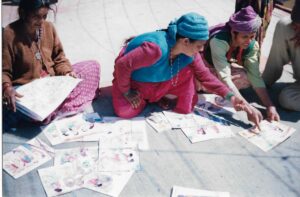 If women were motivated once, nothing is left to be changed. Then they become a moving force against all odds and even superstitions. This change of attitude of women has also changed the environmental sanitation conditions in Kanda and Karnali. The programme started with a monthly cleanliness campaign peaked to the construction of 68 toilets or 80% against zero in 2009, before our entry into the village. The impact of this project visualized as follows:

2.   Better health and hygienic condition also lead to improvement in their living standard and a sharp drop in waterborne and fecal transmitted disease.

3.   The message of hygiene and sanitation spread to other villages and people demanded similar project.