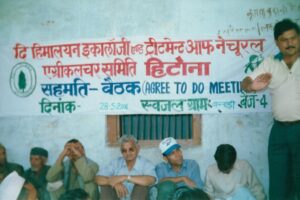 In my childhood, I had heard about the village of Banadi from our elders that when there was snow in the winter season, there used to be the wild deer, reindeer and swine in the Obar of the house (the ground floor) where the animals are tied.  I used to be very happy in my mind that how lucky are people there who find the meat of wild animals sitting at home, otherwise in my village hunters used to take rounds of the forest for weeks with guns in the wild hunting and sometimes it was empty hand. This incident must have happened about 45-50 years ago, which is now remembered in writing the impact story of the Swajal project of Banadi village. The famous tourist town of Uttarakhand, the queen of mountains Mussoorie is in front of the Nagatibba mountain range and Banadi exists in its lap at an altitude of about 1900 meters above sea level, located just below the Pattharkhaul ridge, which connects the Dashgi-Hatad belt with Jaunpur block, in the Nagungad waterway, towards the dense forest of Chir, Cedar, Banj and Burans.  According to a head count survey in Banadi in 2001, there were 62 families and 578 populations residing in the gram Panchayat with several subgroups. They were so naïve to vehemently oppose the survey of a road connecting their village in seventies of the nineteenth century due to an artificial fear of eloping with strangers of their womenfolk with accessibility to the road near the village. However, the village has now been connected under the Pradhan Mantri Gram Sadak Yojana, after 45 long years which is linked to Manayi spot of the Silkyara-Bangaon-Saroth motorway. The block headquarter Chinyalisaud is about 50 km and district headquarters Uttarkashi about 80 km from here. 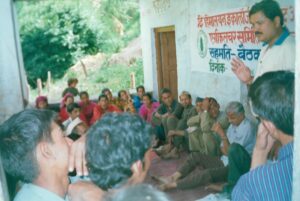 Since it was the early days of Swajal project, and communities were hard to believe that a developmental works can be done by other than government departments. They have hardly heard of NGO’s role in facilitating the development works. So it was a challenging task for us to make a rapport with the community and also make them to believe that developmental works are also being done by the non-government organizations.

Since health, hygiene and environmental sanitation were also an integral component of the project besides the drinking water supply, so right from the beginning with the first entry into the village, our facilitators start with social mapping on issues of hygiene and sanitation. Starting with individual get together, group discussion, focused group discussions to the formation of SHGs and village water and sanitation committees, meetings and workshops, we finished with agree-to-do meetings.

A number of times, we were encountered with peculiar questions and assumptions of the community member. I quite remember as a team leader in an open public meeting at Banadi village, when I was focusing on the importance of toilets and their construction, a youth stood and interrupted me and said “what is the need of toilets? We have vast forest here to defecate.” The naïve audience also clapped on his statement, though some senior citizen felt annoyed. Though for the time being I got puzzled with this question, but immediately controlling myself to look normal, I explained to the audience in detail about the waterborne and fecal oral rout transmission diseases that how they reach from hand to mouth and cause a number of intestinal ailments prominent amongst them are diarrhea. I further explained that how open defecation endangers the health of our kids and how kids and their skins are susceptible to bacteria and worm’s attack. I also explained that in the absence of toilet and bathroom how the dignity of our mothers and sisters is at stake. They need privacy for such things apart from a continuous fear of an attack of wild animal like leopard and bear. The story is too long to tell that how tricky is to ensure the community participation. But we had it and the story became a success.

Here also we started focusing on women and used a number of participatory tools including SARAR to motivate and galvanize them for taking decisions and implementing the hygiene and sanitation components of the project as their counterparts were mainly interested in the construction of water scheme. Except Ragoli a hamlet of 4 households, there was hardly the scarcity of water, but the quality of water in Banadi main and Talli Banadi was bad. In Banadi main where 36 families reside, there is no scheme of potable drinking water and the villagers used to fetch water from a rivulet flowing from the center of village exposed to filths including human feces. Similarly villagers of Talli Banadi used untreated canal water on which water flowing from Banadi main  also joined. Hence, using this water exposed them to a number of waterborne diseases, despite been living in highland areas of nature.

Three water schemes respectively, for Banadi main, Talli Banadi and Ragoli amounting to a cumulative cost of Rs. 13.32 lakhs were constructed, which are still operating after the expire of its design period of fifteen years. 31 toilets, 28 compost pits similarly soak pits were constructed. However, now the sanitation coverage is 100 percent gram Panchayat is defecation free, but in 2001 construction of 50% toilets were no way less achievement, which paved the way for total sanitation campaign in all villages of the Nagungad watersheds. Following were the impact of this project:

1. Accessibility of adequate safe water reduced the cases of diarrhea and jaundice as reported by a sub-PHC Banchaura covering the village.

2. Apart from time saving and drudgery reduction, access to women’s privacy due toilets and bathroom led to improvement in their health, hygiene and sanitation, which was noticed by other village women and called it a miracle.

3.   Villagers became more vocal on their developmental issues, struggled for electrification of villages and road connectivity. Finally, they have achieved it within a few years.