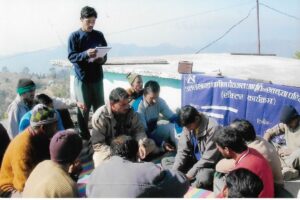 Kathuki Chaal, a short time sleepy mini market, abode of peace with dense forest and open sky, located on Kaddukhaal-Maldevta-Raipur Road connects Dehradun city, is a center of GP Ghena’s half dozens of scattered tiny hamlets on different locations of hillsides. Kathuki Chaal is situated mid-way on a ridge extending about 10 km from Anand Chowk of Satengal GP to a hill at Dhanchula GP at an elevation of about 1600 meters above sea level. This entire belt is not only inhabited by humans, but also an abode of dense forest of oak, pine and burans and if you want to enjoy driving with sweet winds on the ridge and hilltops, choose a Sunday, pack your lunch, take the children along and run away in your own car as it is the best and nearest place from the city of Dehradun.

GP Ghena of Jaunpur block of Tehri Garhwal, Uttarakhand India and its hamlets due to its topography is scattered and stretched over an area of around 40-50 square kilometers. The sub-villages located at different elevation ranging from 800 -1600 meters where we have worked for water supply and sanitation were Taal, Bansiyan, Bithwala, Tunetha, Danda Maswadidhar and Lamiyadhar. In 2009, as per head count survey there were 74 households with 524 populations.

Had there not been the sector programme of uniform drinking water supply approach, these inhabitants of scattered tiny sub-villages couldn’t have quenched their thirst. It was during the summer of 2009 when HETONA as a support organization had entered into an agreement with Uttarakhand Jal Sansthan Tehri, one of the districts implementing agency of SWAp, a water and sanitation program exclusively sponsored by the World Bank and Government of Uttarakhand. UJS-HETONA-GP Ghena a triumvirate, were key partners of planning, implementation, operation and maintenance. 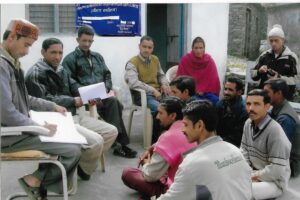 Six user water and sanitation sub-committees (UWSSCs) of above mentioned sub-villages under the gram Panchayat Ghena were formed, nurtured and trained. These sub-committees were imparted a number of trainings during planning and implementation phases. During planning phase HETONA’s facilitators with their hard work motivated the members and the community to ensure their full participation in planning and implementation of not only water scheme but also household sanitary latrines, despite the scattered and far flung reach of these sub-villages. Six detail project reports for water schemes were prepared and the combined cost was Rs. 40.83 lakhs.

Here, also the women took keen interests and lead in activities as fetching water was solely their headache. It was they, who suffer the most due to unavailability of water, absence of toilets and bathing facilities as they need privacy. In the sub-committees the percentage of women was 50 and the NGO facilitators motivated and trained them to become vocal in raising their issues. 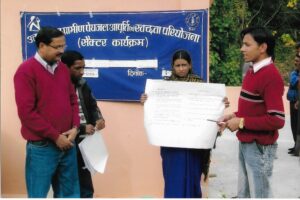 We made Kathuki Chaal the center for in house training for all sub-committees, so that they take part and concentrate fully. Trainings and meetings at Kathuki Chaal also helped spreading the message of SWAp program, especially of sanitation, health and hygiene, which is related to the availability of water. Also the women of all these sub-villages got the chance to meet each other and exchange views. They have their own stories narrate about their hardships, scarcity of water and unhygienic living conditions. This further galvanized them and the program was so successful that apart from constructing water scheme, they have also constructed toilets with bathrooms. 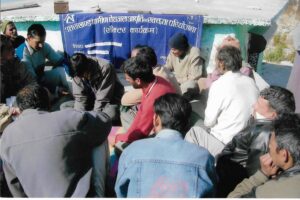 The program was so successful that the Uttarakhand Jal Sansthan chose GP Ghena for the World Bank Mission visit which verified the scheme and sanitation coverage of little hamlets, interacted with women members, UWSSC members and other stakeholders. The mission praised the facilitation of HETONA and work done by GP and UWSSCs. It was also a proud moment for us as volunteers of the NGO. Followings are the impact of the SWAp in Ghena:

1.  Neighboring villages and inhabitants were a little bit surprised about this project and they were hard to believe that water line can be taken to the small hamlets of even 5-6 households. Due to this popularity and acceptability of SWAp spread in the entire Saklana area and people demanded the same program in their own villages and hamlets.

2.  Awareness increased manifold amongst women not only on water and sanitation, but also on way of lifestyle and other livelihood issues, technology inputs and the use of technology to reduce their workload.

3.  The increase in production and marketing of green pea has registered handsomely, which led to the enhancement of the family income.

4. The impact of environmental sanitation was widespread and it became a people’s movement and owning a toilet is related to the prestige of the family amongst relatives.

Next Story- When a local deity Nagaraja blocked toilet construction?