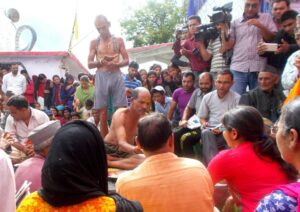 It was the beginning of autumn in 2014 when HETONA was contracted to construct around 6000 toilets in 111 gram Panchayats in Uttarkashi district of Uttarakhand under the Swachh Bharat Mission, a much awaited central program of the newly elected Modi government. Since it was a central program, the entire administrative machinery was also put into the action and the program was being closely monitored by the district magistrate. During these stirring days, our facilitator Manbir Rana working in a cluster known as Jibya of Chinyalisaur block, informed us that the local deity Nagraja was not only obstructing the construction of toilets, but have also demolished the toilets constructed earlier during NRWDP and UNDP sponsored drinking water and sanitation program at Kyari and Badalda villages respectively. He also informed that all 8 surrounding villagers got scared of the curse of Nagraja and has given up constructing the toilets. 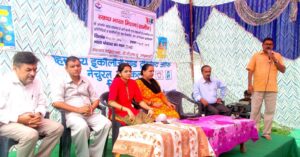 The situation was precarious and we all, including district authorities were in dilemma that what to do? But we were very determined to construct the toilets and make the program a success, which means defecation free of all villages. So we decided to organize a convention of all 8 villagers at Kyari village on July 13, 2016, where a temple of Nagraja is situated. We further decided to call all the disciples of Nagraja on whom the deity usually appear and give instructions. We wanted to call the deity to appear on them in the midst of gatherings and wanted to request to allow the construction of toilets. The 8 villages consist of Tarakot, Suri, Dargarh, Badalada, Ramoli, Jibya, Kyari and Mathali. 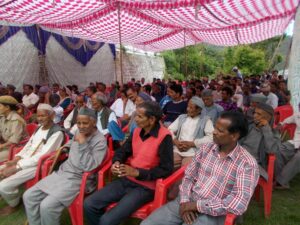 Therefore, as per the schedule of program people including district and tehsil authorities, line departments, Panchayat representatives, NGO’s workers, media scribes and common citizen of these 8 villages gathered at Nagraja temple premises to witness this unique event. Prominent among them were Ms. Nitika Khandelwal an IAS trainee, Mr. Anand Singh CDO, Mrs. Punam Rayal Pant Tehsildar, Mr. Rakesh Jakhmola Project Manager, DPMU etc. From 11 AM to 4 PM speakers from all hues addressed the gathering and emphasized on the importance of Swachh Bharat Mission and construction of toilets for personal and domestic hygiene and environmental sanitation. Issues of health and hygiene related to this campaign were further elaborated with examples like how water borne and fecal oral route transmission diseases spread and cause intestinal ailments. Everyone those who spoke at the convention stressed on open defecation free villages. Speakers also answered the queries of common people on toilet construction and other related issues. The convention was moderated by Secretary HETONA Mr. Ranveer Singh Rana.

4 P.M. was the time to appear of deity on someone. So all necessary arrangements made in advance were collection of milk and water and raw rice, which were put on a stone slate platform on which the deity was to appear with the special tuning of drum beating. His mighty started appearing on his most trusted disciple, as that person also started shivering with thrills. With the high sound of drum beats shivering also picked the pace and deity came out in disguise and took off his clothes and threw them towards the public and suddenly jumped on to the shoulders of a person standing near to him. Riding on shoulders peaked his shivering and he took 5-6 brass pitchers of water, raised up one by one above the height of his head and poured on his body and got bathed. He also poured some milk and then got down and sat on the platform and started speaking rhythmically certain hymens. For the moment there was a pin drop silence, but suddenly a person among the audience stood and put a question before the deity: Parmeshwara…! Tell us whether we can build toilets or not? All officials from district administration are at your court to take your permission. Others and some officers also pleaded the same. 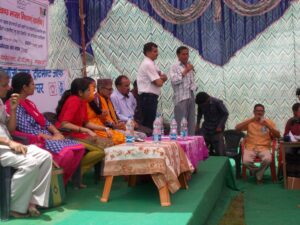 After a pause, deity started murmuring something which no one understood. Then suddenly Mr. Khushal Singh Rana, a vocal man from Mathali village, asked the deity in a loud voice: Parmeshwara..! Don’t murmur and speak clearly. All people from 8 villages who trust you blindly gathered here for your guidelines on toilet construction. Then Nagaraja said in a loud voice tightening his fist “you can construct a toilet, but should be 100 meters away from my premises in each village and not be constructed in eastern site.” With this all people rejoiced and the convention went over. The impact of this event was as follows:

1.   Though the method was peculiar and to some extent obscurantist because of the superstitious belief of people on their deity, but the impact of this event was widespread and toilet construction expedited and within a year these entire gram Panchayats have constructed 100 percent toilets became the open defecation free.

2.   The news of this event spread all around and other villagers also moved to speed up the construction of toilets and got consent of their local deities to allow the construction.

3.    With the villages became open defecation free, the block health department reported decrease in the incidents of intestinal diseases, especially of diarrhea caused by fecal-oral transmissions.

Ranveer Singh Rana is presently Secretary HETONA and a prolific writer has been contributing exclusives articles on social, environmental, agriculture, rural economy from 1985 onwards in different newspapers and magazines prominent of them were Economic and Political Weakly, Jansatta, Patriot, Link, Mainstream, and Himalayan Paryavaran and Contributed over 100 articles.

Next Story-NRDWP rejuvenated the appetite of development of Dwari inhabitants